Season 40 Play Submissions begin March 1st, 2020!
This year, our play submission period will run from March 1 to April 30. Be sure to check out The Process for detailed information

The auditions/callbacks for Do It Now! that were scheduled for Wednesday have been canceled. We’ll be in touch with new dates as soon as we can. Stay home and stay safe, everyone. We’ll get through this.

The Baltimore Playwrights Festival is proudly partnering with playwright Rich Espey and composer Jonathan Jensen to present their musical DO IT NOW! Directed and choreographed by Timoth David Copney-Welton, this show promises to be a Baltimore-area summer sensation! An Additional Audition and Callback will be held on 3/18 to become part of this premiere performance. A stipend will be provided to all participants.

PLEASE PREPARE A SONG OF 16 TO 32 BARS. SIDES WILL BE GIVEN FOR COLD READINGS.
REHEARSALS WILL START THE SECOND WEEK OF JUNE

The Baltimore Playwrights Festival is proudly partnering with playwright Rich Espey and composer Jonathan Jensen to present their musical DO IT NOW! Directed by Timoth David Copney-Welton, this show promises to be a Baltimore-area summer sensation! Auditions are being held on 3/8 – 3/9 to become part of this premiere performance. Click for details. 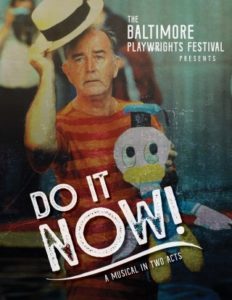 by Lyra Yang.  Paper Dream follows the journey of four Chinese women in the 1930s: a self-proclaimed aristocrat, her husband’s second wife’s obedient daughter, a working-class mother, and a talented young prostitute as they find themselves trapped like prisoners in a “land of freedom”.  It is about the ghosts they left behind, the spirit of who they are, and the dream of what they might become.  A haunting period drama that reckons with the spectre of nationalism still stalking immigrants at America’s borders.

Retreat Across the Jerseys

by Leslie Allen.  Liz, a no-nonsense Marine explosives expert, returns to her north Jersey hometown in 2031 after a decade in Central Asia’s “forever wars.” But on her way to the deathbed of Angela, her estranged mother, she meets B.J., a local character who has peddled everything from condos to children’sslippers to dubious tales – and most of all, dreams – in the changing neighborhood. B.J. and Liz each harbor a painful secret, and their chance encounter triggers a journey into the buried past – all the way back to and beyond a different chance encounter on the same corner by Newark’s airport. That late-night meeting, 30 years earlier, would link the three characters – all outsiders marginalized because of race or gender, class, and more – to each other and to untold chapters in American history that ask us to question the meaning of patriotism.