11:00 am
What Did Happen
by Rosemary Zibart
directed by Miriam Bazensky

Rosemary Zibart‘s work encompasses plays, articles, screenplays, and books for children. The Jewel in the Manuscript – a vivid drama about Fyodor Dostoevsky and Anna Snitkina – was a finalist at festivals across the country, won the Icicle Creek Theater Festival and has had two full productions. A semi-finalist at the Eugene O’Neill Playwriting Festival, All Too Human features the “unholy trinity” – Frederick Nietzsche, his friend Paul Rée and Lou Salomé. Ms. Zibart also helped produce series Minds Interrupted: Stories of Lives Affected by Mental Illness and created a video-based website thecrookedhouse.org. 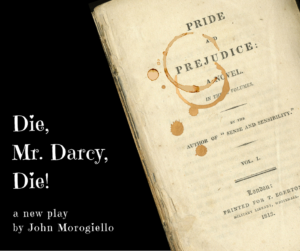 No man can live up to the hero of Jane Austen’s Pride and Prejudice. If, as Jane Austen observes, “It is a truth universally acknowledged that a single man in possession of a great fortune must be in want of a wife,” then what is the universal truth for a thirty year old, single woman with a good job in the 21st century?

John Morogiello is a Playwright in Residence at the Maryland State Arts Council and a member of The Dramatists Guild.  Among his many plays are Engaging Shaw (Old Globe, Vienna’s English Theatre in Austria, New Jersey Rep, Oldcastle, and Abingdon Theatre Company off-Broadway) and Blame It On Beckett (Colony Theatre, Abingdon); both been published by Samuel French. Mr. Morogiello’s articles have been published in The Washington Independent Review of Books, American Theatre, Dramatics, and in programs and study guides for Long Wharf Theatre, Huntington Theatre Company, Everyman Theatre, and Belmont Playhouse.