Speaking of orchestration, there was a scene from a musical! All of the playwrights attended and were able to hear reactions from the full audience to their scenes. Here are the plays and authors, in order of presentation:

Our regular fall and winter Saturday free public readings of these and other plays submitted this spring will begin soon–get on our email list or watch this space for updates. 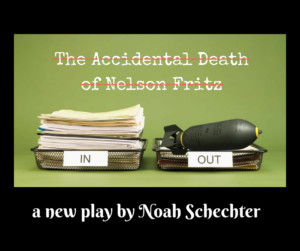 This year we will be presenting scenes from new plays submitted for our 37th Season. Featured playwrights are:

The Redemption of Rube Moats by A.J. DeLauder

The Ride by Craig Nelson

Small House, No Secrets by Jody Nusholtz (book and lyrics) and Sonia Rutstein (music and lyrics)

Free tickets can be reserved at: https://www.eventbrite.com/e/the-bold-the-beautiful-the-best-scene-from-new-plays-tickets-36665268806.

Free Fall Baltimore is made possible by the Baltimore Office of Promotion & The Arts, an independent 501(c)3 non-profit organization, and the generous contributions of BGE, American Trading & Production Corporation (Atapco), and The Henry and Ruth Blaustein Rosenberg Foundation.

Two damaged strangers take shelter from an unknown menace in the claustrophobic confines of a family bomb shelter. Anna and David will have to decide if what is outside is more terrifying than what they are hiding inside themselves.

Laura King is an award-winning playwright and member of the Dramatists Guild. She holds an MFA in playwriting from Hollins University and is an instructor of theatre at Gordon State College. Laura’s plays are available at StageRights, YouthPLAYS, Polychoron Press, and the New Play Exchange.