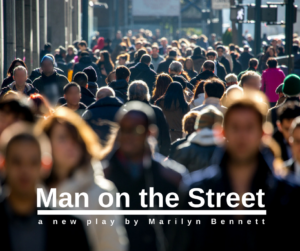 Season of the Baltimore Playwrights Festival summer original play productions begins this week. This year the participating theaters will be offering everything from full productions, to book-in-hand productions and developmental staged readings.

First off is The Man on the Street by Marilyn Bennett at Fells Point Corner Theatre. Directed by Kathryn Falcone, it runs from June 30 to July 9. Get more information about buying tickets and parking at www.fpct.org.

A man in an overcoat comes to the aid of a woman being mugged. A scuffle ensues and the man slumps to the ground. A few minutes later several people walk by, who notice the man but walk on. Who was he? What happened to him after they walked away? Should they have stopped? One woman struggles to find the answers.

Marilyn Bennett is a playwright and actor in the DC area. Her one-act play, The Prophecy, directed by Dwane Starlin, won the Thunderous Productions’ One-Act Play Festival in 2015. Her 10-minute play, Rosalie, was performed at the Capitol Fringe Festival in 2016. As an actor, Marilyn has been seen in many DC area theatres, including Rep Stage, Maryland Ensemble Theatre, Next Stop Theatre, Bay Theatre Company, and the Source Theatre Festival.

Information about the Baltimore Playwrights Festival, its mission and history, and upcoming events can be found at www.baltplayfest.org